Rescue for the chemical capture and translocation of a 32kg male Eastern Grey Kangaroo from the premises of the Kangaroo Football club in Queanbeyan NSW. 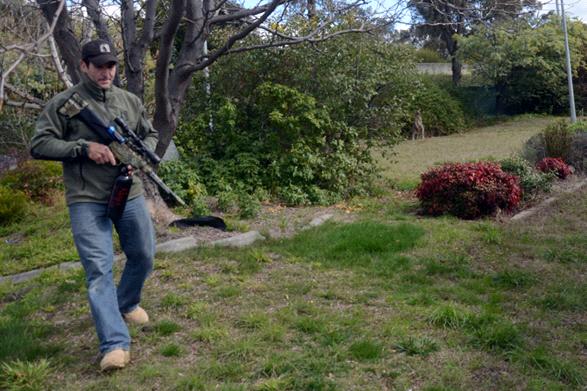 An initial site assessment was made for the trapped Kangaroo located at the Kangaroos football club in Queanbeyan.  A safety briefing given to the on site wildlife carer as well as the club’s manager of the property at Wallaroo NSW.  On site staff were utilised to stop pedestrian and motor vehicle traffic from entering or exiting the premises.  The appropriate dosage rate of sedation was calculated for a 95kg male EGK, drawn and loaded into the pneu-dart projectile ready for application.

The target was acquired from a safe acquisition point after a 20 meter approach creep to the target.  Distance was calculated as to provide the appropriate velocity to the projectile/ target animal as to alleviate any impact injury during the dart delivery.  The oblique target animal was successfully sedated and supine within 3.5 minutes, and ready for recovery and transportation prep.

The male EGK was released into the care of the wildlife carer for transport to the pre determined release site.

After successfully capturing and sedating the male EGK, he was translocated to the pre determined release site, where he was monitored as he recovered from sedation, and observed until he was comfortable eating, and later was joined by resident kangaroos.